“I am crippled with fear.”

A few summers ago, my dad went through major back surgery.  For about two months prior to the surgery, I was crippled with fear that he was going to die.  Waves of emotion would come over me without warning. I would burst into tears, hysterically sobbing, absolutely terrified that he was going to die on the surgeon’s table.  Little things would happen during this time that convinced me God was preparing  me for my dad’s death.  Every fiction book  I read that summer, the dad died.  Every movie I watched, the dad died.  (I am not exaggerating.)  Of course this only fed my paranoia.  I would lay in bed at night, sobbing, BEGGING God to not take my dad away.  I just wasn’t ready yet.  I told God I wouldn’t be able to handle it.

Have you ever been crippled with fear or worry like that?

A fresh wave of that fear crashed over me again last night.  Someone very close to me was admitted to the ER.  As I drove to the hospital, I began to panic.  That same feeling of absolute terror that I just described began to crush me.  I didn’t know if the situation was life or death, but I immediately jumped to the conclusion that it was.  I began to plead with God not to take this person.  “Not now.  I cannot handle this right now.” I told Him.  I actually told God that I rejected His plan.  “Sorry, Lord.  I’m rejecting this option.  So if your plan A is to take this person, you’re going to have to move on to plan B. I won’t stand for it.  He can’t die tonight.”  (side note: Where on earth did I learn to talk to the Creator of the Universe that way?!)

Well, the great news is that this person is fine and was released from the hospital later that evening.  But here’s my point, or really my question, in telling you all this.

Why do I allow myself to be crippled with fear?

Matthew 6:27 says, “Can any of you by worrying add a single hour to your life?”  That is the verse that boomed in my head last night as I drove to the hospital with tear-filled eyes.  Do I actually think being terrified of the future, freaking out, or being overwhelmed with worry is helping anything?  It certainly doesn’t change the situation.  It definitely doesn’t add an hour to my life.  And I’m pretty sure it only makes things worse.

In the Bible, the vast majority of the time when an angel or heavenly messenger appeared to someone on earth, they would start by saying “Do not be afraid.”  Now, I’m sure this is mostly because if you suddenly saw an angelic creature standing in your bedroom, you would FREAK OUT.  But I also know that in the Old Testament, God tells his men and woman over and over “Do not be afraid. Do not fear, for I am with you. Be strong and courageous.”  Those commands are read hundreds of times throughout the Bible.  I think it’s because God knows that our typical, human response to change or circumstances outside of our control is fear.

After the saga of last night, I was on the phone with one of my best friends, recounting the evening.  She sweetly laughed when I told her how I told God I rejected His plan.  She asked, “Why do we think we have any sort of control in this life?”  We really don’t.  We have no control of the future.  And that creates fear.

Here’s what we can control: our decisions and the way we react to things.

You can absolutely control the decisions you make, the things you say, the way you behave and act.  What we can’t control is everything else around us (the way other people behave, the decisions others make, the way the future unfolds).  BUT we can control the way we react or respond to all those other things.

I can’t control if a dear friend or family member is ever hospitalized again.  I can’t control if/when my dad dies.  What I can do is not allow fear to completely overwhelm me.  I can choose to say out loud, “Okay, Lord. I trust You. I don’t like any of this, but You are sovereign and I trust in Your goodness. Even when life is dark and sad and gross, I trust You and I will not be overwhelmed by fear.”

So the next time you feel the waves of fear coming upon you, don’t let yourself get swept away.  Acknowledge that you don’t have control over the situation and, instead, choose to trust in the Lord.  Ask Him to help you, to give you the strength, peace, wisdom, and ability to get through whatever the future holds. 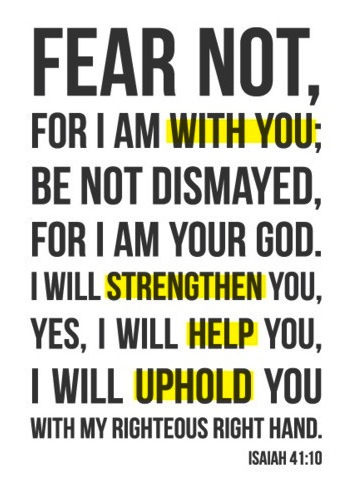 4 thoughts on “I am crippled with fear.”